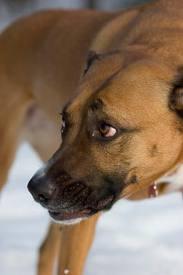 Sadie is a 14 wk old recently adopted mixed breed puppy, her history is unknown, but we know by observing her behavior that she is nervous about many of the day-to-day sights, sounds, and happenings in her new urban home. When she encounters something she finds scary, she sometimes will run to her new human mom and sit on her feet. Sadie’s mom, doing what many of us would instinctively do, bends over, looks into her big brown eyes and pets and snuggles the adorable, soft pup, sweetly explaining that she has nothing to fear.

What is wrong with this picture? Is there anything wrong?

There are many things Sadie’s mom may hear from people regarding the training of a fearful dog:
“Don’t coddle her! You are only teaching her it is ‘okay’ to be scared!”
“By giving her attention when she is scared you are only communicating to her that there is indeed something to be scared of!”
“Praising her for reacting fearfully only reinforces her fear!”

While I do agree with the general idea conveyed in these statements, I take major issue with the wording. To fully understand, let’s review the laws of learning theory and how dogs learn.

We know, thanks to the work of behavioral psychologists Ivan Pavlov and B.F. Skinner, that dogs learn in two ways:

Operant conditioning: dog DOES something to CREATE a consequence; this mostly comes into play during obedience training; does not represent the bulk of a dog’s learning.

Classical conditioning: dog just IS while the world just happens around it; relates to emotions; is happening ALL the time; represent the primary way dogs learn.

Example: Say we want to socialize out puppy to like people, so every time a human approaches our dog we give them the pup’s favorite food—chicken—to feed the puppy. How does this work? Dog likes chicken; when dog eats chicken it FEELS good. If all people give dog chicken, dog starts FEELING GOOD when it sees people. An association is developed between seeing people and the dog’s emotional state.

So what happens when a dog is scared? It is experiencing an emotion, thus classical conditioning is in play. We cannot OPERANTLY condition a dog to FEEL. You cannot “train” a dog to feel scared (or happy, or whatever) on CUE. A dog cannot MAKE itself feel an emotion. We can only purposely change a dog’s emotion by creating associations (most commonly by pairing the stimulus with food or toys/games the dog loves).

Now I’d like to share a personal story to help relate these principles back to dog training.

Throughout most of my life I have had a mild fear of spiders. If I saw them outside, it was not a big deal, I would just avoid them, but if they were in my house, I would freak out! Historically I just ran to my parents and they dealt with the spider. This taught me that as long as the house spider was a certain distance away from me I could remain calm knowing that all I had to do to feel safe again was call my parents to take it away. When I moved out, I was suddenly faced with a problem; my parents were no longer there to help me.

Thankfully I did have a roommate to help me cope with this spider fear. I will tell you how I overcame it shortly, but first let’s explore 3 ways this scenario could have played out.

First: What if every time I saw a spider in our apartment, I ran to my roommate and she did like my parents and took care of the spider. What would happen? A couple things:

1.) My learned behavior of seeking help to deal with this scary moment would be reinforced.
2.) My fear of spiders would not change.

Second scenario: What if my roommate LOVED spiders and instead of killing the spider like I wanted, yelled at me for being so irrational, said how stupid I was for being afraid of an adorable little spider, and in an effort to prove to me that spiders are nothing to fear, picked the spider up and tossed it at me. What would happen?

1.) My learned behavior of seeking help would be punished—it not only did not work, but the outcome was very aversive to me, thus making me less likely to try that behavior again!
2.) My fear of seeing spiders in my home would increase. I had learned to cope with my fear of spiders at a distance, but having a spider touch me was panic inducing!

Third (and actual) scenario: I saw a spider and ran to my roommate to help, as I had learned to do throughout my childhood. Instead of dealing with the spider for me, she calmly talked me though what to do myself. She patiently explained to me why spiders are not scary (it will not jump onto your face, it will not bite you and even if it did, it is not a poisonous variety, etc), while talking me through the process of safely and effectively scooping it into a cup and chucking it outside. Wow! What happened here?

1.) My learned behavior of seeking help was neither reinforced nor punished (it would soon extinguish).
2.) My fear of spiders in my home actually decreased because I learned reasons to not fear them, and:
3.) I learned a new behavior to help me cope with my fear trigger (spiders).

Now, how does this apply to dogs like Sadie? Let’s examine one of Sadie’s fears: rustling plastic bags. What is happening right now?

What is Sadie LEARNING? Well, we still need a little more information to know for sure.

For example, does Sadie start running away from bags less often? Or run away from the bags less abruptly? If this is the case, then we know that Sadie’s mom’s praise is actually accomplishing the desired goal: Sadie’s fear is decreasing, as observed by her behavior. In this scenario, praise worked to classically condition Sadie. Praise created enough of a pleasant association with her fear trigger (plastic bags), that she was able to get over her fear—her emotion was changed.

Now if Sadie was instead doing the opposite, running from bags more often, or at an increased rate, then we know the praise and attention is making the behavior of running away increase. Does this mean that praise is actually making Sadie more fearful? Absolutely not. Remember, emotion cannot be operantly conditioned. Her fear of the bag remains unchanged. But what did happen was that her BEHAVIOR in the face of fear has been reinforced. She has learned that running from plastic bags and sitting on mom’s feet makes her feel good, so she runs away from them faster and more often in order to feel good sooner. The same as what happened in my childhood when I ran to my parents when I saw a spider.

I believe this latter scenario is the reason for the common belief that “coddling a fearful dog makes the fear worse.”

So, what could Sadie’s mom do instead?

Well, we definitely do not want her to ever force Sadie to encounter a fear at a rate she cannot emotionally handle. This would be like my roommate throwing the spider on my face! This has such a high likelihood of making the behavior worse that it is not worth the risk. (This technique is called “flooding,” when a human or animal is forced to experience its fears).

One thing we do know for sure though, doing anything the dog considers unpleasant (raised voice, leash pop, force, etc) while it is experiencing fear will create an UNPLEASANT association, and instead of desensitizing the dog to scary plastic bags, it may instead sensitize them (make the fear worse). This is why, in my opinion, praising and coddling a fearful dog is in no way the worst thing you can do (as I have heard many people say). Not only can we easily undo an operantly trained behavior (like Sadie’s behavior of sitting on mom’s feet at the sight of a plastic bag) by training a new operant behavior (investigating the bag on her own), but praise may in fact WORK to help your dog overcome her fears. And lastly and more importantly, praise will certainly NEVER, EVER make your dog more fearful.

So, next time you hear someone say “never coddle a fearful dog!” remember that a.) this only applies to the behavior the dog engages in at the time, not their actual emotional state, and b.) every dog is an individual, but all dogs respond to the laws of learning. Do what works for your dog.